Undoubtedly the world's most famous stamp is the British Guiana 1-cent black on magenta stamp of 1856.  With only one copy known to exist, its rarity is as interesting as its long history.

At the time, stamps for British Guiana were printed in England and shipped to the South American colony by ship.  But with the slow communication and transportation times, it was not uncommon to run out of certain stamp denominations before new supplies arrived.  This is exactly what happened in 1856, when supplies of 1-cent and 4-cent stamps, used for newspapers and local letters, sold out before new stocks arrived.  Postmaster E. T. E. Dalton asked Joseph Baum and William Dallas, publishers of the colony's newspaper, the Official Gazette, in Georgetown (who had also printed the colony's first stamps in 1850) to print an emergency provisional supply.

Baum and Dallas printed the 1-cent and 4-cent denominations on a bright magenta paper using their newspaper press.  With no perforating equipment, stamps were left imperforate and would be cut from sheets as needed.  The crude design pictures a sailing ship and the colony's motto "Damius petimus que vicissum" ("we give and expect in return"), framed by black lines.  Postmaster Dalton was not pleased with the quality of the printing, feeling they could be easily counterfeited.  With no other options, he decided to put the stamps on sale but insisted postal clerks initial each stamp upon sale to prevent fraud. 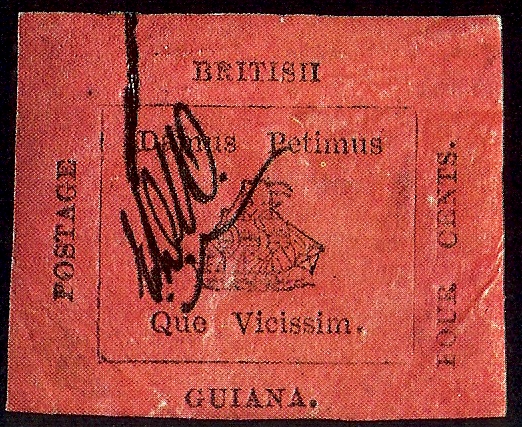 The 4 cent black on magenta, illustrated to show details of the design.

Although several 4-cent values have survived, to this day, more than 150 years after its issue, only one copy of the 1-cent value has been found.  Smudged, damaged, its corners trimmed to an octagonal shape, and initialed "EDW" by clerk E. D. Wight, it was postmarked in the town of Demerara on April 4, 1856.  It was discovered by Vernon Vaughan, a local schoolboy, in 1873 when looking through family letters.  Wishing to raise money for his own collection, he sold it to local collector N. R. McKinnon for the sum of six shillings.

Five years later, McKinnon sold his collection to Wylie Hall, who asked London dealer Edward Pemberton to look at it.  It was at this time that it was identified as a unique stamp.  Rumors of a second copy have surfaced from time to time.  Noted stamp collector Baron Philippe von Ferrari bought the unique stamp in 1878 for 150 pounds.  Upon his death in 1917 he bequeathed the stamp to the Berlin Postal Museum, but the French government seized it as war reparations and sold it in 1922.  In the 1920s, it was owned by famous collector Arthur Hind, who was rumored to have bought a second copy and destroyed it so he would still own the only example. It is the only British Commonwealth stamp missing in the collection of Queen Elizabeth II.

Although the 1-cent magenta was displayed frequently at expositions throughout most of the 20th century, it has not been seen in public since the 1970s.  Its most recent owner was eccentric millionaire heir John E. DuPont, who was convicted in 1997 of murdering Olympian wrestler Dave Schultz and sentenced to 30 years in prison.  DuPont bought the stamp in 1980 for $935,000, a record price for any stamp at the time.  DuPont died in prison in 2010.  In 2014, DuPont's heirs announced that his British Guiana collection, including this famous unique stamp, would be put up for auction.  On June 17, 2014, this unique stamp was sold to shoe designer Stuart Weitzman with a bid of $7.9 million (nearly $9.5 million with the buyer's fee), a new world's record.  In November 2014 the National Postal Museum announced a long-term loan from the new owner of the stamp to display it at the museum in Washington DC, where it was on display until December 2019.

Here is the stamp as it appeared in March 2014 when authenticated by the Royal Philatelic Society of London. The image of the front has been enhanced to show the detail.  One of its most fascinating aspects is the reverse, which shows the marks of several of its famous owners, including two stamps of Ferrari's purple trefoil mark; a large faint manuscript "H" and cloverleaf "AH" handstamp of Arthur Hind; a small "FK" of Finnbar Kenny, the stamp manager at Macy's who brokered its sale by Hind's widow; a small shooting star added by Frederic Small who owned it from 1940 to 1970; a pencilled "IW" by Irwin Weinberg, head of a group of investors who bought the stamp in 1970; and a large pencilled "J E d P", initials of DuPont.  The large 17-pointed star may have been added by Hind's widow Ann Hind Scala to obscure a cloverleaf mark of her husband. 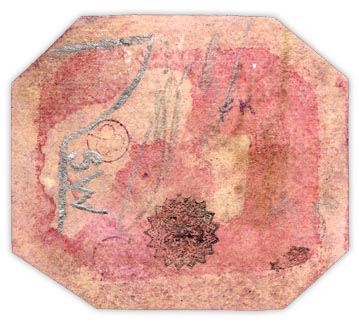 In October 2019, Weitzman followed the tradition of the stamp's previous owners by adding his initials to the backl of the stamp in a ceremony attended by many of philately's notables. His signature, the initials "SW" and the outline of a stiletto shoe in bold pencil, shocked the philatelic community with its size and strong impression, although experts say that the signature did not damage the stamp. 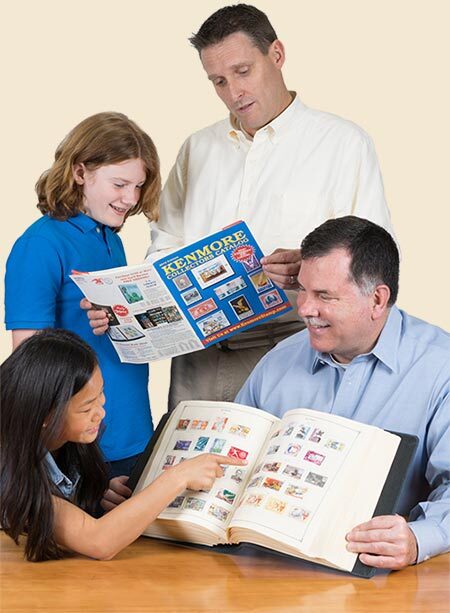