What is an Inaugural Cover? 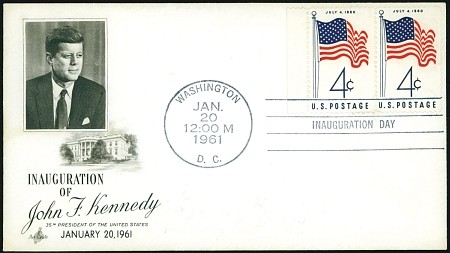 A typical Inaugural Cover is an envelope with a printed cachet depicting the President or other patriotic symbols, postmarked on Inauguration Day. Until 1937, Inauguration Day was held on March 4, but in 1937 it was moved to January 20 where it remains today (or the 21st if the 20th falls on a Sunday). While the variety of the stamp on the cover isn't important, it is frequently something patriotic like a flag stamp, and it will be postmarked with a special "Inauguration Day" postmark. In recent years, Inauguration Day postmarks have often been available from the hometowns of the President and Vice President as well. It was not until 1957 that the postmark included the words "Inauguration Day", prior to 1957 they are found with either a regular machine or hand cancel or four parallel lines. 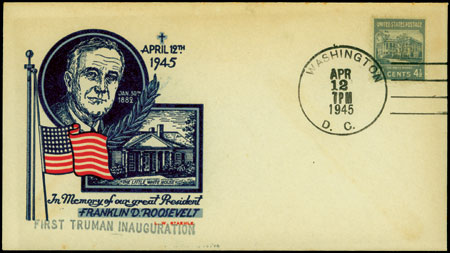 Truman was sworn in at 7:09 pm after most post offices were closed, making inaugural covers scarce.

Occasionally, official Inauguration Day postmarks were not available due to an unexpected inauguration, but enterprising collectors and cover preparers were able to get covers postmarked on these days.  This has happened at least three times in the past century: in 1945 after the sudden death of President Roosevelt, in 1963 after the assassination of President Kennedy, and in 1974 after the resignation of President Nixon. Since there were less covers made for these unplanned inaugurations, they tend to sell for more than the usual March 4 or January 20 covers. 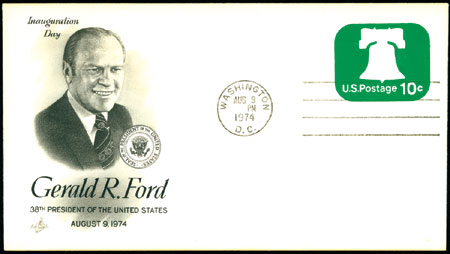 Nixon announced his resignation on the evening of August 8, giving collectors little advance warning to prepare for Ford's inauguration the following day.

Inaugural Covers are very popular among cover collectors and are often collected alongside first day covers. As with First Day covers, they can be found with a variety of printed cachets.