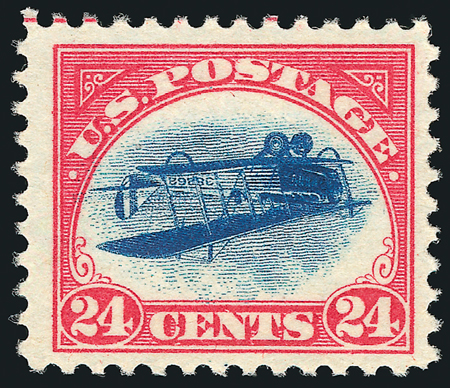 While the red and blue 24¢ "Jenny" is famous for being the world’s first airmail stamp, one sheet of these stamps has become the most recognized and famous rarities in the world. Through an error during the printing process, a single sheet of these has an inverted image of the Curtiss Jenny airplane.

The "Inverted Jenny" sheet was bought on May 14, 1918 at a regular post office by avid stamp collector William Roby for $24. The error was not immediately noticed by the postal clerk because he later commented that he had never seen an airplane before, and therefore did not realize it was upside down.

However, as a collector Roby immediately recognized the value of such a rare error and sold the entire mint sheet to Eugene Klein a few days later, for $15,000. Before Klein broke up the sheet of 100 inverts, he penciled a position number on the back side of each stamp. This allows each stamp to be precisely located and identified. All of the original 100 stamps have been identified, although several have not been seen in decades, one remains lost due to theft, and others have sadly been damaged in some way, including one man whose maid vacuumed up the rare 24¢ invert inadvertently. After hours of frantic searching, the collector eventually recovered it from the inside of the vacuum. Recently, a single "Inverted Jenny" in excellent condition sold at auction for nearly $1.6 million. While there are rarer and harder to find stamps on the market, the "Inverted Jenny" remains the most famous and recognizable stamp error in the world.

On September 22, 2013, the U.S. Postal Service reissued the "Inverted Jenny" design in a sheet of 6 self-adhesive $2 stamps.  Originally sold in sealed envelopes, 100 specially-printed non-inverted sheets were rendomly inserted into the regular inverted stock, creating an excitement among collectors lucky enough to find one of these rare sheets.  To date, less than 35 non-inverted sheets have been reported found, and on the rare occasions they come up for sale they sell for about $50,000!