What is a Plate Block?

Generally speaking, a plate block is a block of 4 or more stamps with selvage attached showing the numbers assigned by the printer to the plate.  Plate numbers have been assigned to U.S. stamp printing plates since the 19th century, and the layout and size of the plate block typically depends on the printing method used to print the stamps. Kenmore offers a wide variety of plate blocks for many U.S. commemorative and definitive stamps.

In the earliest days, stamps were produced by the flat plate method. For one pass through the press, one sheet of stamps would be printed.  Around 1920 the U.S. Bureau of Engraving and Printing began using the rotary press, where stamp plates were curved around a cylinder, allowing the continuous printing of stamps on a roll of paper that would later be cut and processed into single sheets of stamps. Every plate used to print U.S. stamps has been assigned a unique serial number for accounting and quality control purposes. 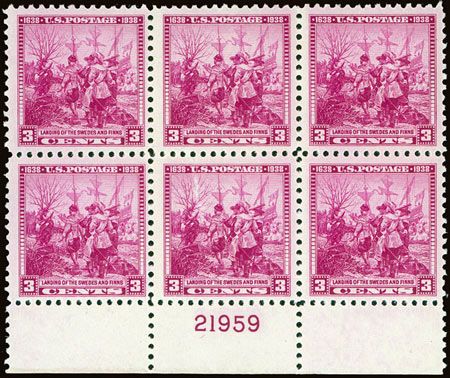 A typical plate block printed on the flat plate press, with the number centered in a block of 6 stamps.

Most stamps printed since the mid-1920s feature plate numbers in the corner of the sheet, and with a single-number plate block such as this example from 1957, it is collected as a block of 4 with all of the surrounding selvage intact.

The basic layout of a flat plate included four plate numbers, in the center of the top, bottom, left and right margins. If the stamp was printed in a single color, the single plate number would be repeated four times in the sheet. Collectors prefer to collect these flat plate blocks in blocks of 6, with the plate number next to the center stamp, making an aesthetically pleasing and balanced plate block.  Occasionally, in some stamps printed before 1920, there would be a printer's imprint beside the plate number bearing the name of the printer, such as the Bureau of Engraving and Printing or one of the contract Bank Note printers. With some of these imprints, it may take a block of 8 to make a balanced plate block. 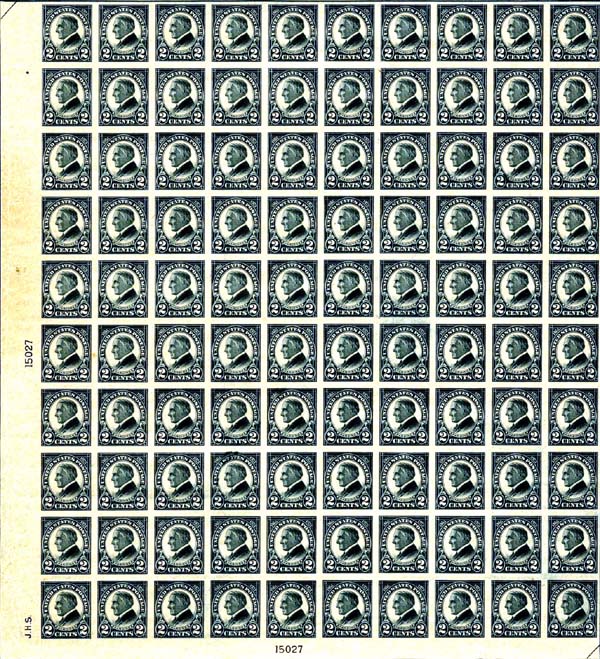 This imperforate sheet of the 1923 Harding Memorial was printed on the flat plate press. Note there are two plate numbers: in the side and bottom margins.

There have been several occasions when a flat plate press was used to print bi-colored stamps. Since two plates were required, one for each color, you would find two numbers in the selvage on adjoining stamps. The accepted way to collect these is in a block of 4, since the block is already balanced there is no need for extra stamps to balance the appearance of the block. 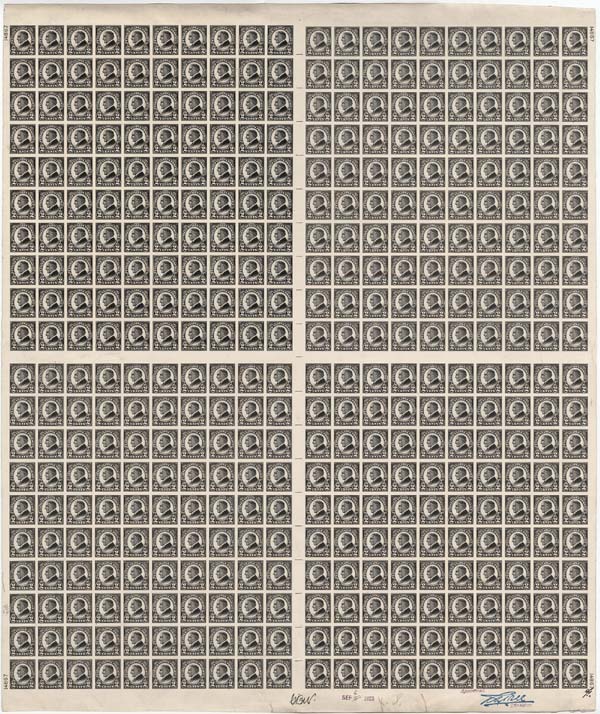 The 1923 Harding Memorial was one of the first stamps to be printed on the rotary press, in addition to being printed on the flat plate press. This uncut proof sheet shows the typical plate layout of rotary press sheets, with plate numbers in the four corners. This press sheet would have been cut into four panes of 100 stamps before being sold to the public.

In the 1920s, as the new rotary press was preferred by the Bureau over the flat plate press since it was considerably faster, the layout of the sheet changed.  Plate numbers were moved to the corner of the sheet (with a few experimental exceptions), and since the rotary press was capable of printing only in one color, only one number would be found on a sheet of stamps.  So collectors now collected a corner block of four as the plate block.  The rotary press became the main method of printing U.S. stamps until the development of modern multicolor presses in the early 1960s.

In one instance, plate blocks do not contain any plate numbers. The Overrun Nations series of 1943-1944, printed under contract by the American Bank Note Company, did not contain any plate numbers in the sheets. However, each sheet was inscribed with the name of the honored nation in the sheet's top right selvage, and these "name blocks" are collected as the plate blocks for this issue.

In the early 1960s, the Post Office wanted to produce more colorful stamps and started using new presses that were capable of printing several colors in two printing methods: engraving and offset.  Suddenly, two plate numbers appeared on a sheet, representing each printing method, but fortunately for collectors these were still able to be saved as corner plate blocks of four. 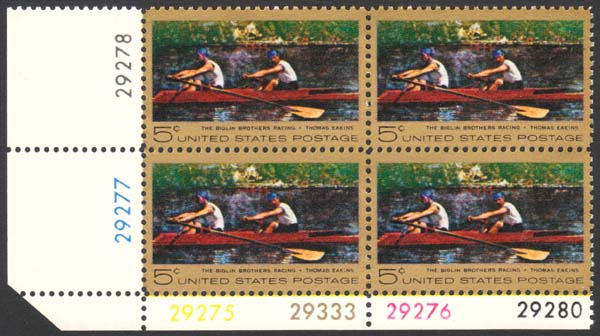 The plate numbers on earlier multicolored stamps were often grouped around the four corner stamps.

In the late 1960s the Post Office desired more lifelike colors in stamps, which resulted in two innovations: multicolor photogravure printing, and the Huck multicolor press. Photogravure is a multicolor process, similar to what is used for package labels and magazines, where a separate plate is needed for each color, producing a smooth photo-like print. Following the practice of placing one number above each stamp, a typical photogravure stamp would require 5 or 6 different colors, so the numbers spread across 6 stamps meant that collectors now needed to collect large plate blocks of up to 12 stamps since you'd need every number attached to the stamp, plus two deep to make a proper block.

The 1968 Christmas stamp was the first stamp to be printed on the multicolor Huck press. Plate numbers would "float" from sheet to sheet.

The Huck multicolor press was used for only a few stamps printed between 1968 and 1978. The Huck was able to print in up to 9 colors, but it was problematic and created an abnormally high amount of spoilage. Unlike other presses which used plates as wide as a sheet of stamps, the Huck used small plates only 2 or 3 stamps wide, mounted on a cylinder. Because of this unusual layout, a typical Huck sheet such as the 1968 or 1969 Christmas issues, would have many plate numbers in the selvage of the sheet, changing in position from sheet to sheet since the size of the printing plate was not an even match with the sheet size. Collectors usually save these Huck plate blocks as the entire edge of the sheet with the plate numbers, so blocks of 10 or 20 stamps (or more properly a "plate strip" since it could be up to 40% of the entire sheet) are needed depending on the size of the stamp.

With the increasing use of multicolor photogravure printing, more plates were required for the additional colors and plate blocks increased in size.

The increased use of multicolor printing, while it gave us colorful and attractive stamps, created a headache for collectors. Giant plate blocks of 10, 12 or more stamps were becoming more frequent, and plate block collectors were uncertain what the typical convention would be for the size of these plate blocks when released from the post office. Responding to collector complaints of the large plate blocks, in 1981 the Post Office changed the method in which plates were numbered.  Rather than using a unique 5-digit serial number for each plate, plates were now assigned smaller numbers for each plate, beginning with 1 for each issue. Plate numbers, even if 6 or more colors were used, could now be grouped above 1 or two stamps, so plate blocks of 4 were again possible even for the most colorful stamps. 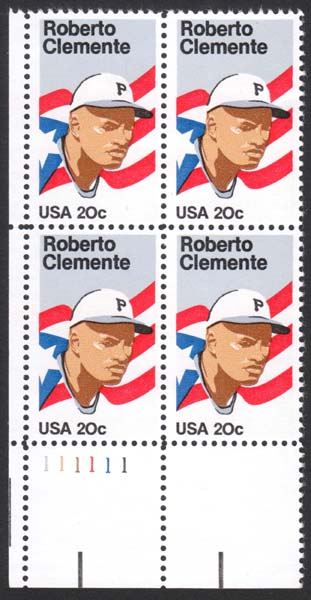 A second innovation in 1981 was the increased use of contract printers. To identify the products of these outside printers, they were assigned a letter prefix to be used alongside the plate number. For example, the American Banknote Company, the first contract printer used in 1981, was given the letter "A", so a plate block printed by this company would be "A1111", with each number representing a different plate color. If the printer changed a plate during the print run, the digit would change for that color, so the plate number of a changed stamp might be "A1121" with the "2" being the changed plate. The Bureau printed its last stamp in 1997, and every U.S. stamp printed since then has been printed by private companies. 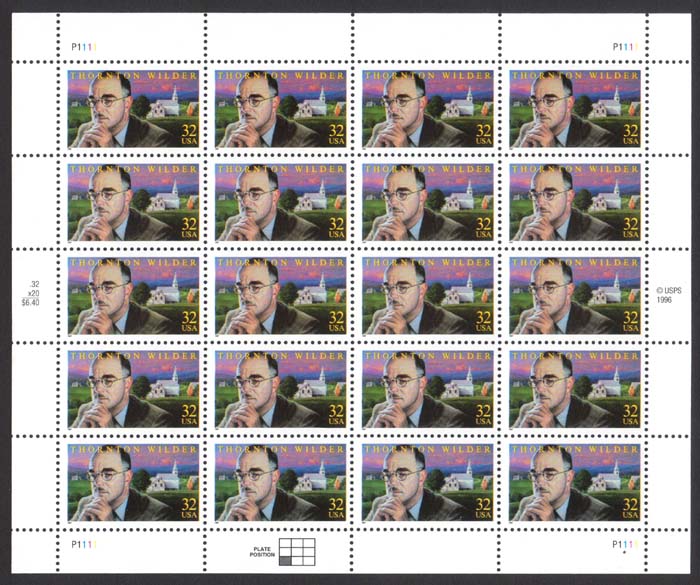 In the 1990s, the sheet size of most stamps was reduced to 20, and plate numbers appeared in all four corners of the sheet.

How to Collect Plate Blocks

Before 1930, when most stamps were printed by the flat plate method, collectors often saved plate strips rather than plate blocks. Sheet inscriptions from around this time usually included the name of the printer followed by a plate number, and this inscription would take the space of three stamps. So it is common to find these inscriptions as plate strips of three.