Recalled Legends of the West

When planning the 1994 "Legends of the West" commemorative sheet, the USPS decided to include the famous African-American cowboy Bill Pickett, inducted into the National Rodeo Cowboy Hall of Fame in 1971, among the sheet's 20 subjects.  Pickett is credited with the invention of steer wrestling, also known as bulldogging.  Little did the USPS know this would lead to one of the most embarrassing and infamous mistakes in their history.

Stamp artist Mark Hess designed the stamp using a famous photograph that had been identified as Bill Pickett.  In January 1994, two months before the scheduled release date, the Pickett family informed the USPS that the stamp actually pictured younger brother and fellow cowboy star Ben Pickett.  Within weeks the USPS announced a recall and destruction of the sheets.  The problem was that over 5 million sheets had been shipped to post offices across the country, and 183 sheets had been sold to the public before the scheduled release date.

Since the few sheets in the hands of the public were being sold at astronomical prices, the USPS decided to do something it had never done before: sell a limited number of the recalled and unissued stamps to the public.  In an attempt to satisfy collectors' demands and offset the $1.2 million printing costs, the USPS reached a compromise with the Pickett family who were promised that none of the error sheets would be sold, and announced a controversial decision to sell 150,000 recalled sheets by lottery.

Meanwhile, the USPS redesigned the stamp using a corrected photograph of Bill Pickett, and the sheet was issued nationwide in October 1994.  For the first time in its history, the Post Office sold an unissued and recalled stamp to the public, and sold stamps to collectors for the first time using a lottery system.  And for the first time, a stamp was recalled due to a design error rather than a production or printing error. 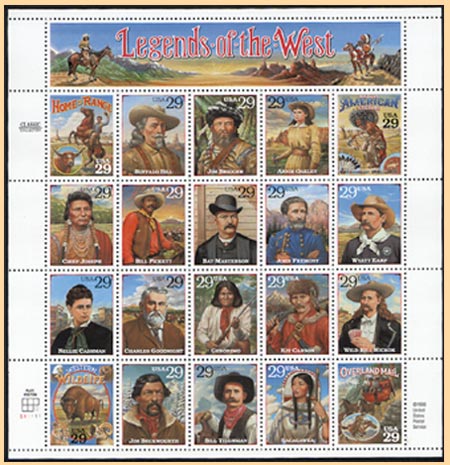