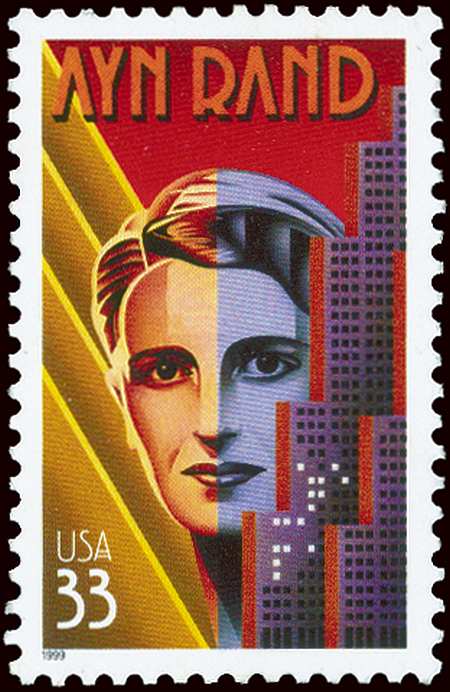 An interesting perspective on stamp collecting by best-selling author Ayn Rand published in the Minkus Stamp Journal, Vol. VI, No. 2 - 1971. The U.S. Postal Service issued a stamp in her honor in 1999, Scott #3308.

I started collecting stamps when I was ten years old, but had to give it up by the time I was twelve. In all the years since, I never thought of resuming the hobby. It left only one after-effect: I was unable to throw away an interesting-looking stamp. So, I kept saving odd stamps, all these years. I put them into random envelopes and never looked at them again.

Then, about a year-and-a-half ago, I met a bright little girl named Tammy, who asked me ... somewhat timidly, but very resolutely ... whether I received letters from foreign countries and, if I did, would I give her the stamps. I promised to send her my duplicates. She was eleven years old, and so intensely serious about her collection that she reminded me of myself at that age.

Once I started sorting out the stamps I had accumulated, I was hooked.

It was an astonishing experience to find my enthusiasm returning after more than fifty years, as if there had been no interruption. Only now the feeling had the eagerness of childhood combined with the full awareness, confidence and freedom of age.

My first step was to acquire a Minkus Master Global Stamp Album. In a year and a half, it has grown to four volumes, plus four special albums ... and my collection is still growing, at an accelerating rate. No, I have not forgotten Tammy: I send her piles of duplicates every few months, and I feel very grateful to her.

In all those years, I had never found a remedy for mental fatigue. Now, if I feel tired after a whole day of writing, I spend an hour with my stamp albums and it makes me able to resume writing for the rest of the evening. A stamp album is a miraculous brain-restorer.

I am often asked why people like stamp collecting. So widespread a hobby can obviously have many different motives. I can answer only in regard to my own motives, which I have observed also in some of the stamp collectors I have met.

The pleasure lies in a certain special way of using one's mind. Stamp collecting is a hobby for busy, purposeful, ambitious people ... because, in pattern, it has the essential elements of a career, but transposed to a clearly delimited, intensely private world.

A career requires the ability to sustain a purpose over a long period of time, through many separate steps, choices, decisions, adding up to a steady progression toward a goal. Purposeful people cannot rest by doing nothing nor can they feel at home in the role of passive spectators. They seldom find pleasure in single occasions, such as a party or a show or even a vacation, a pleasure that ends right then and there, with no further consequences.

The minds of such people require continuity, integration, a sense of moving forward. They are accustomed to working long-range; to them, the present is part of and a means to the future; a short-range event or activity that leads nowhere is an unnatural strain on them, an irritating interruption or a source of painful boredom.

Yet they need relaxation and rest from their constant, single-tracked drive. What they need is another track, but for the same train ... that is, a change of subject, but using part of the same method of mental functioning.

Stamp collecting fulfills that need. It establishes a wide context of its own, interesting enough to hold one's attention and to switch one's mind temporarily away from exhausting problems or burdens.

In the course of a career, every achievement is an end in itself and, simultaneously, a step toward further achievements. In collecting, every new stamp is an event, a pleasure in itself and, simultaneously, a step toward the growth of one's collection. A collector is not a passive spectator, but an active, purposeful agent in a cumulative drive. He cannot stand still: an album page without fresh additions becomes a reproach, an almost irresistible call to embark on a new quest.

There are also certain differences.

Stamp collecting is an adjunct of, not a substitute for, a career. A career requires problem-solving ... creative problems, technical problems, business problems, etc. Stamp collecting requires a full, focused attention, but no problem-solving; it is a process of cashing in on the given and known. If one makes it a substitute for productive work, it becomes an empty escape; an unproductive mind does not need rest.

The course of a career depends on one's own action predominantly, but not exclusively. A career requires a struggle; it involves tension, disappointments, obstacles which are challenging, at times, but are often ugly, painful, senseless ... particularly, in an age like the present, when one has to fight too frequently against the dishonesty, the evasions, the irrationality of the people one deals with. In stamp collecting, one experiences the rare pleasure of independent action without irrelevant burdens or impositions. Nobody can interfere with one's collection, nobody need be considered or questioned or worried about. The choices, the work, the responsibility ... and the enjoyment ... are one's own. So is the great sense of freedom and privacy.

For this very reason, when one deals with people as a stamp collector, it is on a cheerful, benevolent basis. People cannot interfere, but they can be very helpful and generous. There is a sense of "brotherhood" among stamp collectors, of a kind which is very unusual today; the brotherhood of holding the same values, one seldom meets a person with whom one has any interest in common; most people today do not actually value or enjoy anything. Stamp collectors have a wide latitude of individual preferences, but the basic principles of the hobby are objective and clear-cut. A stamp collector would not reject the one-cent British Guiana on the grounds that it is unique ... and he would not exchange it for a dozen German Inflation stamps on the grounds that these were more fashionable since more people used them.

The pursuit of the unique, the unusual, the different, the rare is the motive power of stamp collecting. It endows the hobby with the suspense and excitement of a treasure hunt ... even on the more modest levels of collecting, where the treasure may be simply an unexpected gift from a friend, which fills the one blank spot, completing a set.

This mood of lighthearted benevolence is particularly important to people whose careers deal with grim, crucial issues ... as, for instance, a writer who studies the trends of the modern world, or a surgeon who faces the constant question of life or death. It is not an accident that a great many doctors are stamp collectors.

Careers of that kind require such a ruthless discipline of total dedication that one can become almost depersonalized. This is why an hour spent on an activity whose sole purpose is one's own pleasure, becomes such a restoring, invigorating life line.

When one turns to stamps, one enters a special world by a process resembling a response to art: one deals with an isolated and stressed aspect of existence ... and one experiences the sense of a clean, orderly, peaceful, sunlit world. Its rules and boundaries are strictly delimited ... the rest is up to one's individual choice. But one does not choose blindly, one deals with firm, intelligible, changeless things. There is constant change in the world of stamps, and constant motion, and a brilliant flow of color, and a spectacular display of human imagination ... but there is no change in the nature and purpose of stamps. Nobody tries to claim ... as people do in other fields ... that a wilted scrap of lettuce from his garbage can is a superior kind of stamp. It is not the place for whims, it is not a world for those who like the chaos of undefinable, shifting, whirling, drippy emotions. It is a world for orderly, rational minds.

But ... it is asked ... why not collect cigar bands, or coins, or old porcelain? Why stamps?

Because stamps are the concrete, visible symbols of an enormous abstraction: of the communications net embracing the world.

An inextricable part of even a casual glance at stamps is the awareness of what a magnificent achievement they represent: for a few pennies, you can send a letter to any place on earth, to the farthest, most desolate corner where human beings might live ... to Greenland or to the Cocos (Keeling) Islands (population 1000). Those bright little pieces of paper will carry your words across oceans, over mountains, over deserts, and still more difficult: over savage frontiers (the most savage of which are not on the underdeveloped continents). Stamps as a postal institution are only 130 years old. Think of the human ingenuity, the technological development, the large-scale synchronization of effort that were required to create a worldwide postal system. (You may curse the inefficiency of your local post offices ... and the ones abroad may be worse ... but look at the total picture of what they are accomplishing.)

While the world politicians are doing their best to split the globe apart by means of iron curtains and brute force, the world postal services are demonstrating ... in their quiet, unobtrusive way ... what is required to bring mankind closer together: a specific purpose cooperatively carried out, serving individual goals and needs. It is the voices of individual men that stamps carry around the globe; it is individual men that need a postal service; kings, dictators and other rulers do not work by mail. In this sense, stamps are the world's ambassadors of good will.

Stamp collecting gives one a large-scale view of the world ... and a very benevolent view. One feels: no matter how dreadful some of mankind's activities might be, here is a field in which men are functioning reasonably, efficiently and successfully. (I do not mean the political set-up involved, I mean the technical aspects and skills required to deliver the world's gigantic tonnage of mail.)

When I hear in the news the name of some country that I discovered only through my stamp album ... such as Tonga or Niue ... I feel a touch of personal recognition, like an affectionate greeting. Stamps give one a personal value-stake, a kind of proprietary interest in distant lands which, otherwise, would remain mere names and empty abstractions. (Some countries are abusing this and putting out an unconscionable amount of philatelic waste, more stamps than could possibly be used for legitimate postal needs. But collectors are free to ignore them.) A stamp album is like a world tour, with the advantage of focusing selectively on the best aspects of various cultures, and without the bitter disadvantages.

Speaking aesthetically, I should like to mention the enormous amount of talent displayed on stamps ... more than one can find in today's art galleries. Ignoring the mug shots of some of the world's ugliest faces (a sin of which the stamps of most countries are guilty), one finds real little masterpieces of the art of painting. In this respect, the stamps of Japan are consistently the best. But my personal favorites are two smaller countries whose stamps are less well known: Ryukyu Islands and Iceland. If this were a competition, I would give first prize, for beauty of design, to two stamps of Iceland that feature stylized drawings of trees.

In conclusion, I want to say a personal "thank you" to a man whose extremely generous interest and guidance have helped me to find my way in a very complex field: Mr. Jacques Minkus. The infectiously irresistible enthusiasm he projects for the world of stamps, and the glamor of the philatelic establishment he has created give him an unusual position in today's cheerless world: the head of an empire dedicated to human enjoyment.