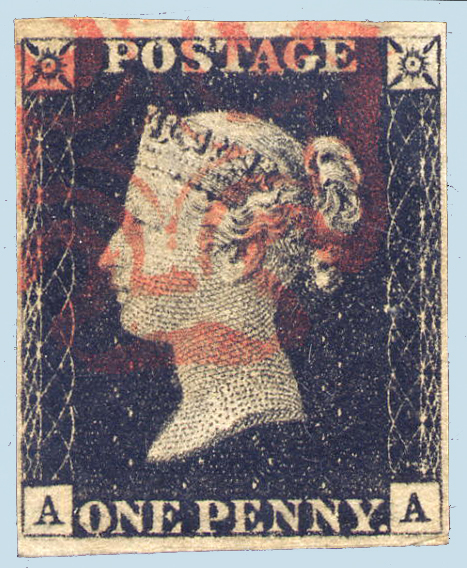 The Penny Black, issued on May 6, 1840, was the brainchild of Rowland Hill. Before the introduction of his prepaid postage stamp, the person who received the letter was required to pay the postman. This created many costly problems for the government when people refused to pay for a letter or package. Corruption, complicated postal rules and exceptions had made mail delivery so expensive that the average person was reluctant to accept a letter from the mailman. Trade and the spread of information became stagnant in this environment. The innovative answer, thought Rowland Hill, was "a bit of paper covered at the back with a glutinous wash so that the bringer might attach it to the letter." Hill chose to use a portrait of Queen Victoria from an 1838 City of London medal as the centerpiece of his Penny Blacks. 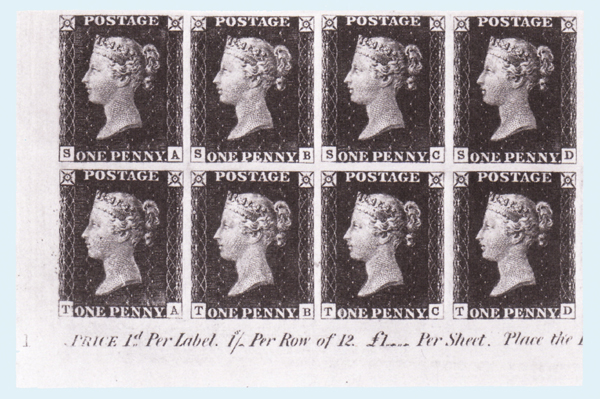 The imperforate Penny Blacks were printed in sheets of 240 with 12 stamps across and 20 stamps down and had to be individually cut by hand. For security reasons they were printed on watermarked paper and a full sheet sold for 1 pound sterling. The Penny Blacks have 2 letters in the bottom corners that correspond to its position on the printing plate (the first row across starts with letters AA to AL, and ends with TA to TL on the bottom row).

While Rowland Hill’s idea originally received some skepticism from the government, British citizens found the idea of using postage stamps to send a letter wildly popular. This started a postal revolution that soon swept the globe.

Since Great Britain is credited with issuing the world's first postage stamp, they are the only country on earth that is not required by the Universal Postal Union to put the name of their country on the postage stamps they issue. On Great Britain’s current postal issues you’ll see the cameo silhouette of Queen Elizabeth II.

Sir Rowland Hill has been credited as the father of the modern postal service. His implementation of pre-paid postage stamps in 1840 revolutionized the British postal system and how we communicated. Early in his career as headmaster of the Hill Top School, he pushed for education reform, citing that kindness and trust should be used to instruct students in modern science. This type of education was vastly different from the system of strict rules and memorization that was generally accepted at the time.

After pushing for postal reform with his pamphlet "Post Office Reform: Its Importance and Practicability" he was appointed Postmaster General, a position which he kept for many years. When he left the post office, he became the chairman of the board for the London and Brighton Railway, where he improved operations and cut the price of a ticket. Visionary reform is the theme of Sir Rowland Hill’s life; and while Hill is most famous for implementing the pre-paid postage system, his proposed system to provide education to the emerging middle class should not go overlooked. Sir Rowland Hill was buried at Westminster Abbey after he died in 1879, almost 40 years after the introduction of the Penny Blacks, the world’s first stamp.